Day 100.  I just need to take a second and say HOLY CRAP.  I did it.  I made it to triple digits.  I can not begin to explain how impossible this milestone felt at the beginning of this journey.  If you’ve been following me, or read my last blog post, you know that I almost did NOT make it, actually. I had a near relapse only 3 short days ago.  Near as in I went to the liquor store and bought beer.   Read about that here nightmare here…https://soberwitch.com/2018/09/02/my-almost-relapse/

Now onto this post.. I have noticed that people do one of two things now that I am identifying myself as an alcoholic.  People either lean in or they lean WAY out.

Let me explain.  When I posted on my Facebook page about my drinking problem, there was so much love and support and kindness.  I was totally overwhelmed with comments and texts and messages and calls. But, of course, there are people who said nothing.  That’s okay.  I don’t need anyone else to validate my life choices anymore and I’m not living out loud for a reaction.

I think some people are scared of me. Or of my honesty.  Or they feel very uncomfortable. Something has caused people to LITERALLY run away from me.  It’s happened 3 times this week.  They see me, avoid eye contact at all costs and either walk- or even RUN- away.

It happened once while I was at Starbucks having a ‘room parent’ meeting.  In case you don’t know what a ‘room parent’ is, it’s a person in charge of the class parties and directory and playdates and all that shit.  It’s a role perfect for me because I love organizing the shit out of everything and I was a classroom teacher in my former life.

I was having coffee with the room parent committee and it happens.  Someone sees me and runs. And I just began laughing.  I laughed so hard I almost began crying.  This idea that now- NOW when I have my shit more together than ever- people are avoiding me.

Funny that when I was a drunken train wreck, unpredictable and unreliable in every way, no one dodged me. When I told people that I as hungover yet again, they laughed it off.  When I was so wasted at a school fund raiser that I was falling on the ground- no one was running then. When I was drunk at my kids’ Kindergarten information night, no one stayed away. When I vomited in my car after blacking out at a family holiday, I texted them about it and they LOLed. But NOW that I’ve owned it, (some) people are avoiding me at all costs.  Fucking hilarious.

And I get it.  I get that it’s uncomfortable. GOOD!  I am so glad to be making people uncomfortable for the right reasons for once.

I guess people think I’ll start talking about it unprompted or (WORSE) asking them about their drinking. Neither of those things are true.  Recovery is part of who I am, but it’s not all that I am.  At all.  I’m still kind and funny and witty. I still like yoga and practice spirituality. I’m still me- I’m just working on being the best version of her.

People hear ‘alcoholic’ and they shy away, but why not shy away from the frequently hungover mom?  Or the one that is seemingly never sober? Or that wild, drunk party animal? Maybe we should start leaning away from them and into people who have the guts to admit it and work on it. 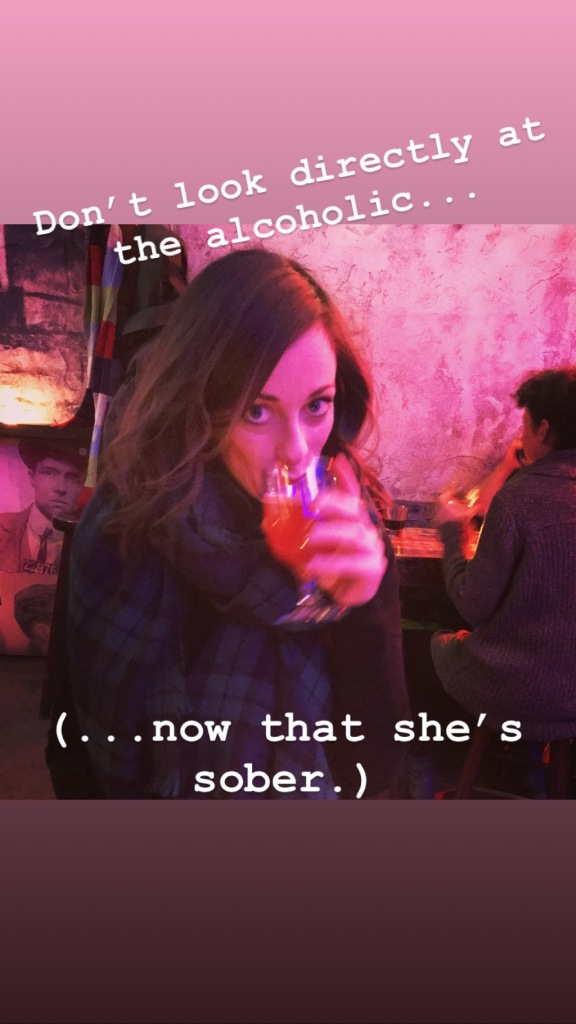